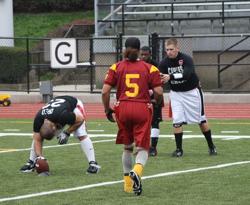 Anyone who knows me knows that I am a proud Philadelphian trying to survive in the Pennsylvania rival city of Pittsburgh. Since my arrival in “Da Burgh” I’ve worked in various capacities for the Pittsburgh Flag Football League (PFFL). Now it gives me great pleasure to welcome our brand of flag football to my hometown of Philadelphia!!!

While the City of Brotherly Love is known for producing countless hoops superstars, southeast PA isn’t as familiar with the game of flag football. That’s why the PFFL is working tirelessly to equip the Philadelphia league with the necessary tools for success.

For those off you that have played flag before you’ll find that our rules are predominantly consistent with those of four-man leagues around the country. At the same time, there are several rules that make the PFFL style of play unique in comparison with our counterparts.

1. The Quarterback can run if a rusher crosses the line of scrimmage.
2. The offense has 4 downs to cross midfield for a first down and then has 4 plays to score a touchdown.

Although players new to our league should study the entire rulebook, understanding the two that I’ve listed are crucial to having success. First of all, athletic quarterbacks should be rushed with caution because they’ve been known to embarrass opposing rushers while picking up precious yardage (YouTube Jason Cahill if you don’t believe me.) Given that most leagues have just three downs, defensive players that are used to three might gas themselves due to playing an extra down.

Despite my allegiance to the PFFL, my allegiance to my city is unmatched, that’s why I’m looking forward to seeing the expansion league in Philly show Burghers how flag football is supposed to be played!!!

Do you have what it takes? Are you a big time #FlagFootball star!? Let me know if you are interested in our new... https://t.co/emkEm1WnbM