“I don’t want to pay this guy because he blew that call!” 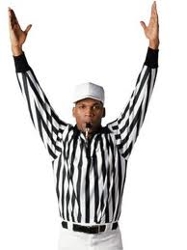 Flag football and adult recreational sports in general have their weird and sometimes uncomfortable situations. Think about that time you went out to play with that “Other” team to just “Help-out” a little bit on defense. You approached the situation with a level head ready to provide help where needed, but little did you know that you were walking into a situation that was similar to a bad divorce. There was finger pointing left and right, unwarranted trash talk backed up by bad play and just in general the energy stunk. Even though your heart and intentions were in the right place, you had no control over this bad experience.

Another familiar circumstance that often arises in almost all flag football leagues across the country is paying ref fees at the end of the game. Revered as the villain of the day, and most commonly never looked upon as the hero, referees are an essential but most often overlooked part of the day. Players understand what the refs purpose is, but in many cases a feeling of “I don’t want to pay this guy because he blew that call!”often shows its ugly face.

It’s not that players and teams have a case of the “Green-eyed” monster, but there is often a level of resent if thing s don’t go as planned. Additionally, who wants to go through the hassle of passing around a pseudo collection plate as If they were at church to ensure the fees are actually paid. Let’s be honest, to ref flag football you have to have a passion for the environment and the game, NO ONE is getting rich!

The good news is that with all Philadelphia Flag Football League tournaments and leagues, there are never any ref fees. So all of the above mentioned madness….well, you can take that out of the gameplan.