You could be the biggest team. The fastest team. 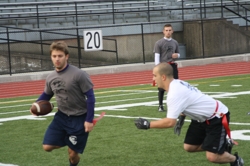 But none of that can assure that you’ll be a championship flag football team. Flag football is one of the most popular adult league sports, mainly because of people’s love of the NFL and college football. However, if you want to be a championship team, there are several measures you need to take.

First, you need to learn how to properly pull flags. Too many competitors think because they are touch-football all-stars, that they can translate that success to flag.

Next, you need to find the perfect compliment of players to build upon. Start with smart, athletic wide receivers that can also play defensive back. Why smart and athletic? Because a 40-inch vertical can’t help you run routes. 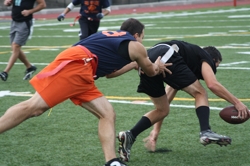 After you get wide receivers, it’s important to find a safety that can also act as your center on offense. The best flag football teams have devastating defensive backfields.

Once you have the positions around the quarterback filled, find a signal-caller that knows the flag football game. He doesn’t have to have the biggest arm, or be an elusive scrambler. Just find somebody that knows when to go over top, and when to drop the ball off underneath.

Finally, once you have learned how to pull flags and have the perfect complimentary pieces in place, start practicing and competing in local tournaments. No flag football team that wins championships, and I repeat NONE, have ever done it without taking some lumps first. 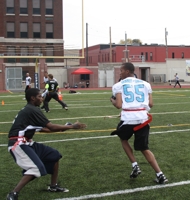 The most important thing about flag football is giving yourself the opportunity to compete again. By listening to these simple pieces of advise, you may not win a championship, but you’ll be on your way.